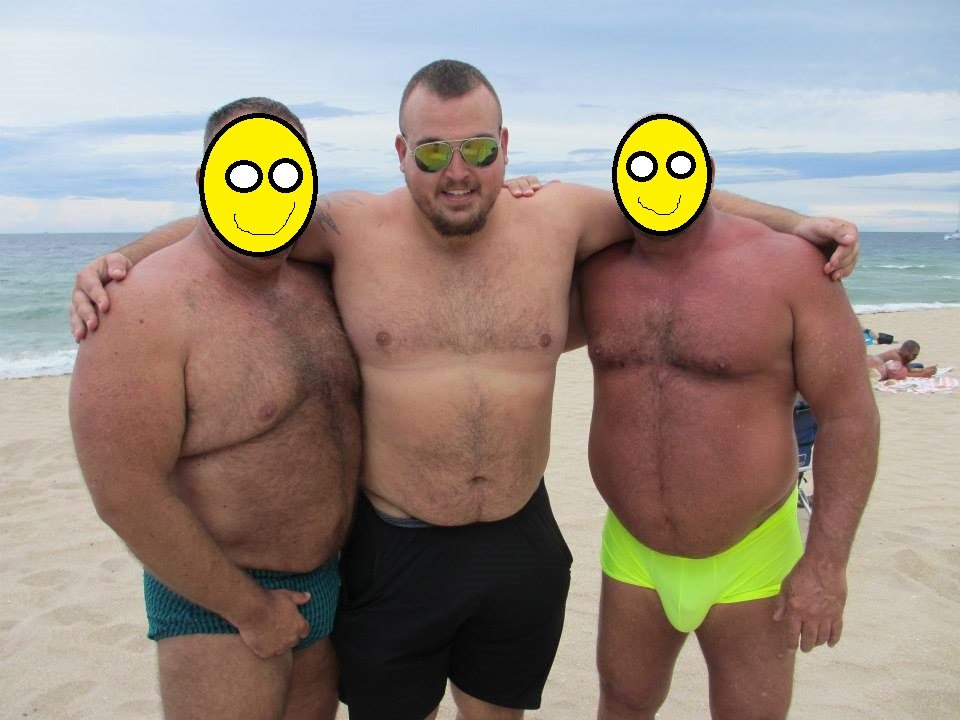 Before I moved to South Florida, and even before I was out of the closet, I had some pretty hot sexy times.  One of my first encounters with a man was with this Muscle Daddy who lived out in the country in the Midlands of South Carolina.  To give you an idea of how long ago this was, I was only 17 years old.  For the sake of this story, I will refer to him as the hermit.  I don’t mean hermit in a disrespectful way, it’s just that this guy identified as gay, but he didn’t have a social life.  The only people he interacted with were his coworkers and his tricks.  He was not into the gay scene and as far as I know, has never had a long term relationship.  He was not creepy, just a very private guy.

I was new to gay sex, and I didn’t know a top from a rim job.  I was online at gay.com I think, and I found this 36 yr old guy who lived out in the country.  He didn’t want to show me his face.  I told him I was 19(when I was really 17), and he sent me a picture of his torso.  I was certainly turned on by his rugged, muscled body, and plentiful chest hair.  He told me, that because I couldn’t get a face pic, that If I showed up and wasn’t into him, that I could leave.  He asked if I like weed and frozen margaritas and that he would have some ready for me when I got there.

So I lied to my parents, being that I was closeted at the time, and headed out to his place in the country.  Once I got off the interstate I drove into the woods on a two lane street for over 30 minutes.  I thought maybe this guy was a serial killer or at the very least cat fishing me.

I followed his directions perfectly and ended up at a pleasant looking cabin sitting atop a hill.  The entrance to the property was fenced with a gate.  I drove up into this driveway and parked in the little spot that was off to the side.  I cautiously walked up his driveway toward his house.  Just as I begun to round the curve at the midpoint of the driveway, I was greeted by a shirtless, tan, furry, smiling daddy.  He was wearing a little pair of swim trunks, black sunglasses, and a baseball cap.

He introduced himself and he walked me up to his pool area.  He offered me a very tasty frozen margarita.  Just as I began to get into the drink, he dropped to his knees and pulled down my pants.  He threw his cap to the side and started sucking my semi hard cock.  He was really going to town on it, lots of suction and tickling my balls.  He was jerking his own cock wildly, completely focused on my shaft down his throat.  He paused and grabbed his margarita off the table beside us.  He took a sip of it, and without swallowing, continued to suck me off.  The frosty, citrus sensation on my fat dick was intriguing if not startling.  I had never received a blow job from a “cold” mouth before.  But I certainly liked it.

I stood there in the summer sun, while this hot muscle daddy knelt between my tree trunk legs and sucked and slobbered all over my cock, while jerking his uncut daddy dick in a fury.  He pulled my shorts completely off me, then rose to his feet and shoved his hands under my shirt to play with my nipples.  Kissing me and talking dirty to me all the more.  We eventually were both completely naked.  He invited me for a swim, I was so hot and sweaty I couldn’t resist.

We got into the pool and cooled down a bit.  I remember how many trees and how lush everything looked in the forest around his property.  He was really far out in the woods.  We wrestled and had a bit of horse play in the pool.  I forced him up against the side of the pool and ground my prick up against this muscle daddy’s tight ass.  He was moaning and carrying on, like another guy hadn’t done this to him in sometime.  We eventually moved over to the shallow area and I got up on the ledge.  He started to suck me off again.  Then he started to lick and tease my nuts quite a lot.  I let him creep his hands up my thighs toward my knee caps.  I instinctually laid back and he raised my knees up out of the water.  He was moving his mouth further south, to territory which had never been explored before.

I had given one rim job a few months prior to this story, but I never received one.  Some people think they know how to eat ass, and they really can’t.  Other people aren’t really into having their asses eaten.  And then there are some guys who can munch for over an hour, and I feel fantastic afterward.  Well considering this was my first rim job, I was floored with new tingly sensations.  I’d had my ear licked and swallowed before, but never my hole.  He just kept alternating between fucking it with his tongue, sipping his frozen margarita, and occasionally splashing pool water unto my butt crack.  After while, I just sat up and crammed my dick in his mouth again, and he inhaled that fucker.  Tears in his eyes from stuffing his hungry mouth.  He was ready to be stretched out.

We laid by the edge of the pool on some chaise lounge chairs.  He and I dried out in the sun while I slipped a rubber on my cock and he applied a copious amount of lube to my rod and his tight muscled hole.  He lit up a joint and started to puff it, then he handed it to me.  I laid back and he hovered his hairy daddy ass over my throbbing cock.  He jerked my cock a few good times and then he lined it up with his hole and slid right down to the base.  He let out this deep grunt and growled, “fuck yeah boy! Fill my hole full of that fat cock!  Fuck Yeah MAN!.” He slid his fingers all the way down the shaft as he rode it the first few times.  At the bottom, he would tickle my balls and play with my taint.  At the top, he would let my cock out except the very tip, then he would shove it right back up his ass on the way back down.  He kept saying what a nice fat cock I had.  Back then, I didn’t know how nice or average my dick was so I was happy to get him off.   He bounced and milked my dick with a passion.  He rode my dick hard, grinding his muscled hips into my cock.  Really milking and banging my dick as hard as possible.  I reached up and started working his nipples.  He was jerking his uncut daddy dick with his left hand while he rode saddle with his right.  He was flexing all his muscles as he twisted and pounced on my cock.

Eventually he hopped up off my dick and we finished the joint we started.  Then I bent his hot daddy ass over one of the lounge chairs.  As I started to slap my fat cock along his ass crack he frantically reached forward and grabbed another Magnum.  He ripped it open in one try, and started rolling it down my cock with his one hand, while he braced for impact with the other. His hole was just winking and twitching as I finished getting the rubber on.  As soon as I had the condom down to the base of my cock I shoved my cock all the way inside his bent over ass.  I pierced his insides and he groaned with pleasure.  I started drilling his hole, moving the furniture all over the pool area.  I would pump away about 20 or so strokes then stop deep inside him. I would work his nipples from behind and make him moan like a stuck pig. When I stopped he would reach between his legs and rub my nuts against his.  He really enjoyed having me deep in his ass.  I pounded his ass for over twenty minutes. He told me to take a break and that he wanted to watch me fuck him.

So we laid down some towels next to the pool and he got onto his back.  He smiled up at me as he pulled his lean, hot legs back to his chest.  He said, “Give me some more of that fat cock boy!!  I love that big dick up my ass.  Damn do you know how to fuck.”  He lubed up his ass and dick again and I lined my fat cock up to his daddy hole.  I slowly ground my cock inside of him.  I really wanted him to feel like this young hot stud was stretching him out like a pro.  He couldn’t get enough.  He just kept smiling and moaning and rubbing his big uncut daddy dick.  I kept slamming my meat inside him, really working my hips deep inside him.  I could feel his hole milking my meat.  He really knew how to flex his hole.

I had to lay there for a few minutes to recharge.  We sipped margaritas and smoked another joint.  I fucked him a few more times that afternoon.  I just remember feeling so relaxed and comfortable out at his house.  The whole property was private.  You couldn’t hear anything but nature all around you.  I continued to meet up with muscle daddy hermit so many times I lost count.  We are still good friends today.  This is the first of many tales about the fun we had together out at that cabin.

One thought on “My Muscle Daddy Hermit”